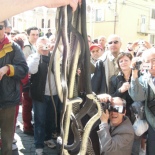 Nestled in the hills west of Sulmona in the Abruzzo region, Cocullo has a population of 250 on any given day.  That number swells to thousands every May 1st when pilgrims from other provinces and people interested in this 985-year tradition converge on the village. The official name of the festival is the Festa dei Serpari di San Domenico (Festival of Snakes of San Domenico). Why snakes? San Domenico is honored for ridding the village of snakes in the 11th century and his statue, draped with these serpents, is paraded through the town for about 1.5 hours.

The snake handlers (serpari) start gathering them in March for the May celebration. The snakes used to be housed in clay pots but are now kept in wooden boxes and fed mice and hardboiled eggs in the days leading up to the festival. There are four types of non-venomous snakes used in the procession. The statue with the snakes and its escorts are accompanied by two women dressed in traditional costumes carrying breadbaskets on their head that contain five ciambellati. Ciambellati are local, sweet, round breads that have been blessed by the parish priest and given to the escorts carrying the statue in the procession.

Stands are set up around town to feed the thousands that have descended on the town for the spectacle. There is a fireworks display at the conclusion of the festival. Parking is quite difficult so expect to walk or be shuttled from wherever you park to the edge of town.

View of Village of Cocullo: paolofefe via Foter.com / CC BY-ND

If you missed out on Rome’s big birthday bash yesterday, never fear, Gelato is here!  What a more perfect way to ring in spring than a stroll through Piazzale Michelangelo in Florence with a gelato in hand.  This weekend is the start of the traveling Gelato Festival.  Held at various locations throughout Italy and Europe, it’s a must-do for iced treat aficionados.  The festival kicks off this weekend in Florence and then has stops in: Parma, Rome, Naples, Turin, Milan, London, Berlin and Valencia before returning to Florence in September. 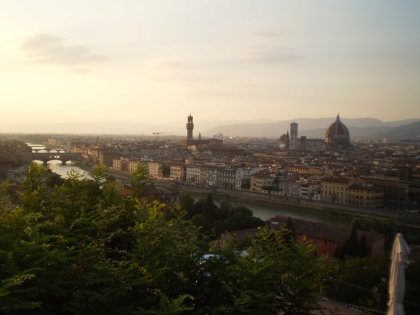 View from Piazzale Michelangelo at Sunset

Have you always wondered what the difference is between gelato and ice cream? In general, gelato is lower in fat, lower in calories and contains less air than ice cream. The reduction of air gives it a dense, creamy goodness that makes you think you’ve died and gone to heaven. The sugar content is higher than typical ice cream, one of the keys that keep it from freezing solid.  If you’re serious about gelato and would like to open your own shop, you can attend Gelato University at the Carpigiani Gelato University and museum in Bologna, Italy to get your basics down.  Serious about gelato, but not that serious, Carpigiani’s flagship store is located just outside their administrative offices and museum where you can sample a variety of flavors served up by students attending the Gelato University.  Carpigiani has also started offering week-long courses in the United States; check out the link below for their calendar and course offerings. 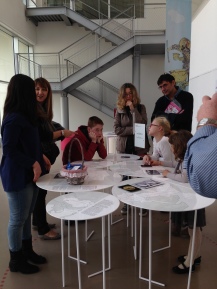 Can’t make it to Europe? You are in luck! A Gelato World Tour is coming to Chicago, Illinois Memorial Day Weekend.  Sixteen artisanal gelato competitors will be competing for the North American Gelato Title at Millenium Park May 27-May 29.  This is both an industry and public event where hands-on workshops will be offered.  Three finalists will also travel to Rimini in 2017 to compete for “Worlds Best Flavor”. There will also be a West Coast stop in September, location and dates are to be announced.  Follow the links below for information and logistics to attend these two tasty events. 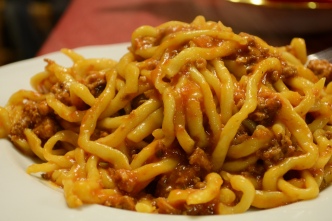 Certaldo is the epicenter for all things wild boar this weekend and next.  Cinghiale, or wild boar, is a traditional meat used in Tuscan cooking when it is not running wild and destroying the beautiful yards of villages.  This is a traditional feast offered with four courses for a fixed price.  Typical cinghiale dishes on the menu inclide: appetizers with wild boar salame; first courses of polenta, pappardelle pasta and fresh tortelli with wild boar sauce; second courses with wild boar steak or a wild boar and black olives.  Other traditional and vegetarian items are available for selection if cinghiale or meat are not preferred.  Side dishes include beans, salad or French fries.  The meal is finished with a sweet choice of cantuccini or gelato and topped off with a glass of local wine. 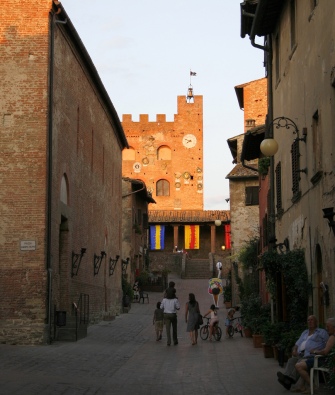 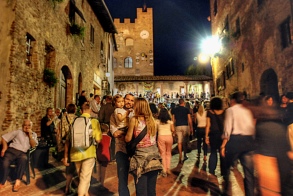 Palazzo Pretoria During Mercantia in July

Certaldo is set about 35 miles southwest of Florence in the Tuscan countryside of Italy and is on the regional train line.  There are two parts to Certaldo: medieval Certaldo Alto (high) and modern Certaldo Basso (low); connected by a funicular.  The Sagra del Cinghiale Certaldo takes place on Viale Matteotti in Certaldo basso.  It starts Lunch is served at 12 noon on the weekends and dinner is at 8 pm every night of the festival at Certaldo also has a famous street art festival called Mercantia in July each year.

The Sagra del Carciofo Romanesco in Ladispoli outside of Rome, claims to be the first festival honoring the artichoke in the world.  Ladispoli is just over twenty miles northwest of Rome on the Mediterranean coastline along the ancient Roman road, the Via Aurelia.  Named after Ladislao Odeschalci who founded the city in 1888, Ladispoli a coastal resort town in the Lazio region.  There were settlements in the area since Etruscan times.Started in 1950 to promote artichokes, particularly tourism in Ladispoli, the festival has endured and is held in early April each year over a three day period.

The 66th festival runs today thru Sunday. There will be stands for tasting the artichokes as well as musical entertainment and cooking demonstrations.  It’s an easy start or finish to your vacation if you are arriving in Rome via Aeroporto Fiumicino. 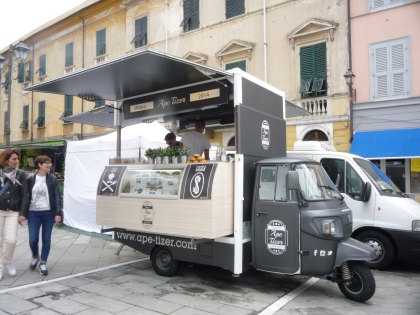 Last May, after a blitz tour of the beautiful Cinque Terre in the rain, I hopped on a train to Sarzana with my friends Ann and Robin to find the STREEAT food truck festival.  The festival highlights food from various regions of Italy and select foods from other countries.  It felt like a foodie tour of Italy, all wrapped up in a bow on Piazza Matteotti.  I’ve always loved the Ape microtrucks seen throughout Italy.  These “tricked out” Apes in the food truck festival are brilliantly designed to showcase their specialty food.  We took turns retrieving a different Italian dish or dessert from the trucks then sampling and critiquing it. Of course, we enjoyed everything, accompanied by some Italian Spritzes. 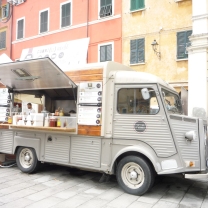 Sarzana is at the foot of the less touristy Lunigiana area of southern Liguria. Located between the famed Cinque Terre and Tuscany, the Lunigiana are hills filled with villages, thirty castles and of course, fine food.  It takes its name from Luni, an ancient Roman town that no longer exists except for a few remaining ruins.  One of the highlights in the city of Sarzana is the Fortezza Firmafede, referred to simply as La Cittadella.  Built in 1249, destroyed in the “War of Serrezzana” by Lorenzo de Medici and the Florentines in 1487 then re-built, it’s only a short walk from the train station and worth a visit if you are interested in historic fortifications. 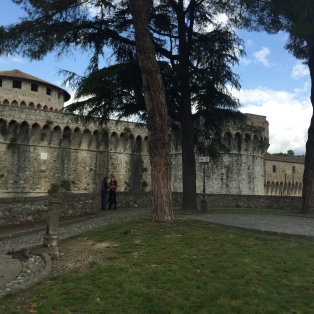 Today is the first day of the 2016 European food truck tour throughout Italy. It begins at Torre Quetta in Bari and will continue on to Langhirano, Mantua, Udine, Padua, Milan, Verona and Genoa on various dates in April – June. The remainder of the schedule, which will continue into fall, has not yet been announced.

Photo Credits: All Photos by Lisa Vogele at the STREEAT Food Truck Festival in Sarzana, Italy May 2015 @travelwithlisa ; Author of the forthcoming book: Food and Folklore: A Year of Italian Festivals, available Summer 2016.