Daytime fireworks, pageantry and excitement surround the centuries old Florentine tradition of Scoppio del Carro.  If you’re in Italy during “Holy Week” you will encounter Easter-related activities in progress in cities and small towns.  Of the many traditions that take place this weekend, the 500-year Florentine Scoppio del Carro is one of the most well-known.  “Scoppio del Carro” literally means explosion of the cart.  A 30-foot-tall antique cart called a Brindellone, also several hundred years old, is hauled by a team of oxen decorated with garlands of spring flowers.  150 people in 15th century dress escort the cart from Porta al Prato to Piazza del Duomo every Easter morning.

Easter Mass is held inside the Cathedral Santa Maria del Fiore (Florence’s Duomo) and at 10:00 AM a fire is lit using three flints brought back from Jerusalem during the First Crusade.  While the ceremony continues inside, the Brindellone is loaded with fireworks and staged outside the door of the cathedral.  A wire from the altar inside is connected to the cart and at 11:00 AM the ceremony reaches its crescendo.  Gloria in Excelsis Deo is sung, a mechanical dove is lit on fire and then it flies down the wire into the cart, igniting the fireworks.  The fireworks display lasts approximately 20 minutes and a successful execution guarantees a good harvest and business in the coming year.

Exploding of the Cart in Front of Florence’s Duomo   moniko moniko via Foter.com / CC BY-SA

La Festa di San Giuseppe (Feast of Saint Joseph) is celebrated throughout Italy on March 19th each year. Wherever you are, you’re sure to find some sort of celebration. Traditional dishes and desserts on this day honor the husband of the Virgin Mary.  In the Lombardy region it’s traditional to eat tortelli.  If you’re in the Molise region you’ll sit down to a 13-course meal.  In Apulia you’ll have a similar 13 course meal, but with a peppery twist. In Sicily platters of food are served alongside special breads. As tantalizing as the thought of these large Italian meals are, it’s the desserts that are my main attraction.

Zeppole, Fritelle or Bigne di San Giuseppe, an Italian donut by any name and I’ll line up to buy some. What’s the difference? Depends on where in Italy you are. If you are in Rome, Tuscany, Umbria and points north, they are called fritelle, made with rice and filled with custard. Further South in Naples, Campania or Sicily, its zeppole you’re looking for. Each have a base of flour, egg, butter and sugar. Bigne di San Giuseppe are deep fried, filled with custard and then rolled in sugar. Zeppole are deep fried balls rolled in sugar or drizzled in honey.

Zeppole in a Cone

Zeppole in a Donut Shape

The variety of zeppole in Southern Italy vary even further by region. In Campania they are sprinkled with powdered sugar and use cherries in syrup for decoration. Near Lecce, they may have some grated lemon and are fried or baked. Sicilian zeppole are fried and dressed with orange honey and powdered sugar with cinnamon. In Reggio Calabria they are small cream puffs stuffed with ricotta. The bottom line is if you like sweets, you’ll find them at a Festa di San Giuseppe.  Mangiare dolci!

Zeppole in a Cone  arnold | inuyaki via Foter.com / CC BY

Zeppole in Donut Shape   Auntie Katkat via Foter.com / CC BY

This weekend, the market town of Campo Tures is a haven for Turophiles, connoisseurs and lovers of cheese. Three days full of exhibitions, talks, live cooking demonstrations and cheese tastings. There are five DOP (Protected Designation of Origin) quality-controlled cheeses from this region: Asiago, Grana Padano, Provolone Valpadana, Spressa delle Giudicarie, and Stelvio/Stilfser; all are cheeses made with cow’s milk. 100 cheese exhibitors from the Alto Adige region, other parts of Italy and other countries will exhibit close to 1,000 types of cheeses. Though the festival is only three days, restaurants in town will feature cheese tasting menus throughout the next week.

Campo Tures lies amid the impressive landscapes of Italy’s Dolomite Mountains. Though the town is within Italy, it is primarily German-speaking. Located along the border with Austria, it was part of the Austro-Hungarian Empire until 1918 when the South Tyrol was promised to Italy as part of the Treaty of London. Campo Tures is also known as Sand in Taufers, the ancestral seat of the Lords of Taufers who died out in 1340. Castle Taufers stands high above the Ahr River, has been restored from disrepair and is open to tourists. 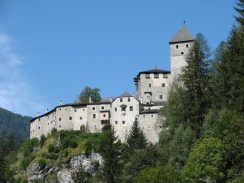 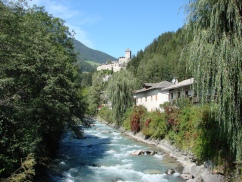 The Ahr River Valley and Campo Tures can be reached by car (best) or public transportation (connections/longer) and is about 43 miles northeast of Bolzano. It serves as a base for exploring the surrounding mountains on foot during the summer and snow showing and skiing in the Dolomites in the winter.

Cheeses Ready for Sale   Michela Simoncini via Foter.com / CC BY

Castle Taufers in Campo Tures   Allie_Caulfield via Foter.com / CC BY

The Ahr River in Camp Tures   Allie_Caulfield via Foter.com / CC BY

Courtyard of Castle Taufers in Campo Tures   Allie_Caulfield via Foter.com / CC BY

Rapini is a vegetable with multiple identities. It’s a green, leafy vegetable with buds that resemble broccoli, but aren’t broccoli. In the United States it’s on produce shelves as both rapini and broccoli rabe. In Italy it varies by area of the country. In Rome it’s broccoletti and in Naples friarelli. If it’s a favorite of yours and you are in Puglia ask for cime di rape (direct translation: ”turnip tops”).

This Sunday is the 15th Broccoletti in Piazza at Anguillara Sabazia’s Piazza del Molo. A lakeside medieval town on Lago di Bracciano, Anguillara Sabazia is 19 miles northwest of Rome by car or 40 minutes by train. Named after the Anguillara family that ruled the area until 1488, the name was changed in 1872 to add Sabazia, after an ancient city located near current day Trevignano Romano.

The food stands will be serving broccoletti deliciously prepared by blanching then cooking in frying pans with some local sausage. Planted last fall, this feast is held on the first Sunday in March to capture the broccoletti at peak harvest time and promote it. Year-round agricultural production in the area includes: pumpkin, peppers, tomatoes, beans, peas and squash. 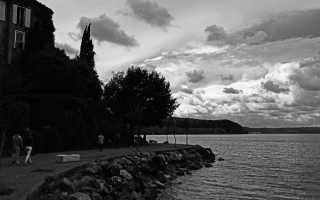 View of Anguillara Sabazia   Nick Peters1 via Foter.com / CC BY

View of Lake Bracciano from Anguillara Sabazia   sunshinecity via Foter.com / CC BY

Broccoletti   naotakem via Foter.com / CC BY